Good news is, the one I’m going to show you today took so many hours that It was hard not to have improved my less than desirable skill. This design is for a tea towel recipe, inspired by the Spoonflower contest brief of tea towel recipe (open for voting from 5th November) but not with any hopes of entering as I thought I would just fail and want to hide my creation from sight…

Before I show you my creation, here are a few inspiring images of chalkboard art and where you can find them: 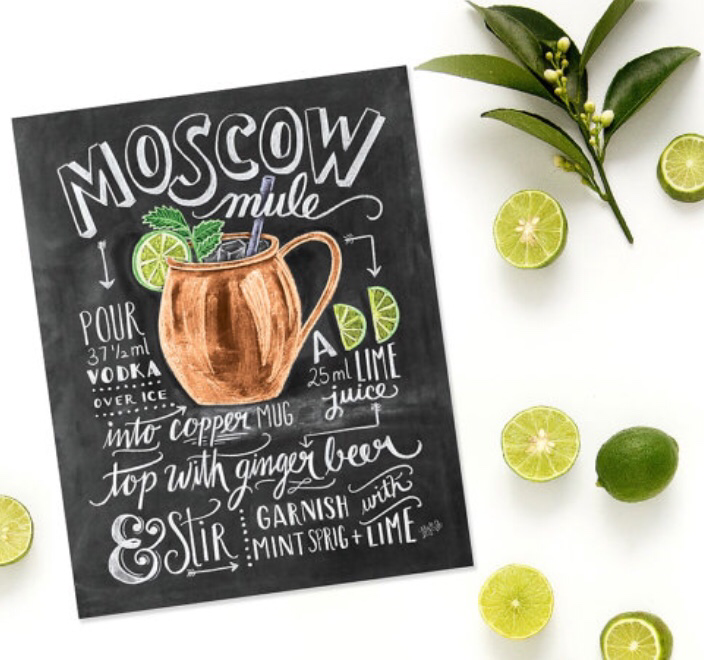 From top to bottom…

I stuck with the blackboard style but originally chose a beige colour for my ‘chalk’. I kept the same border as I used on my previous tea towel and temporarily left it white. I also did the same swirly writing. At this point, aside from googling chalkboard art recipe I still had not done research into Hand Lettering. 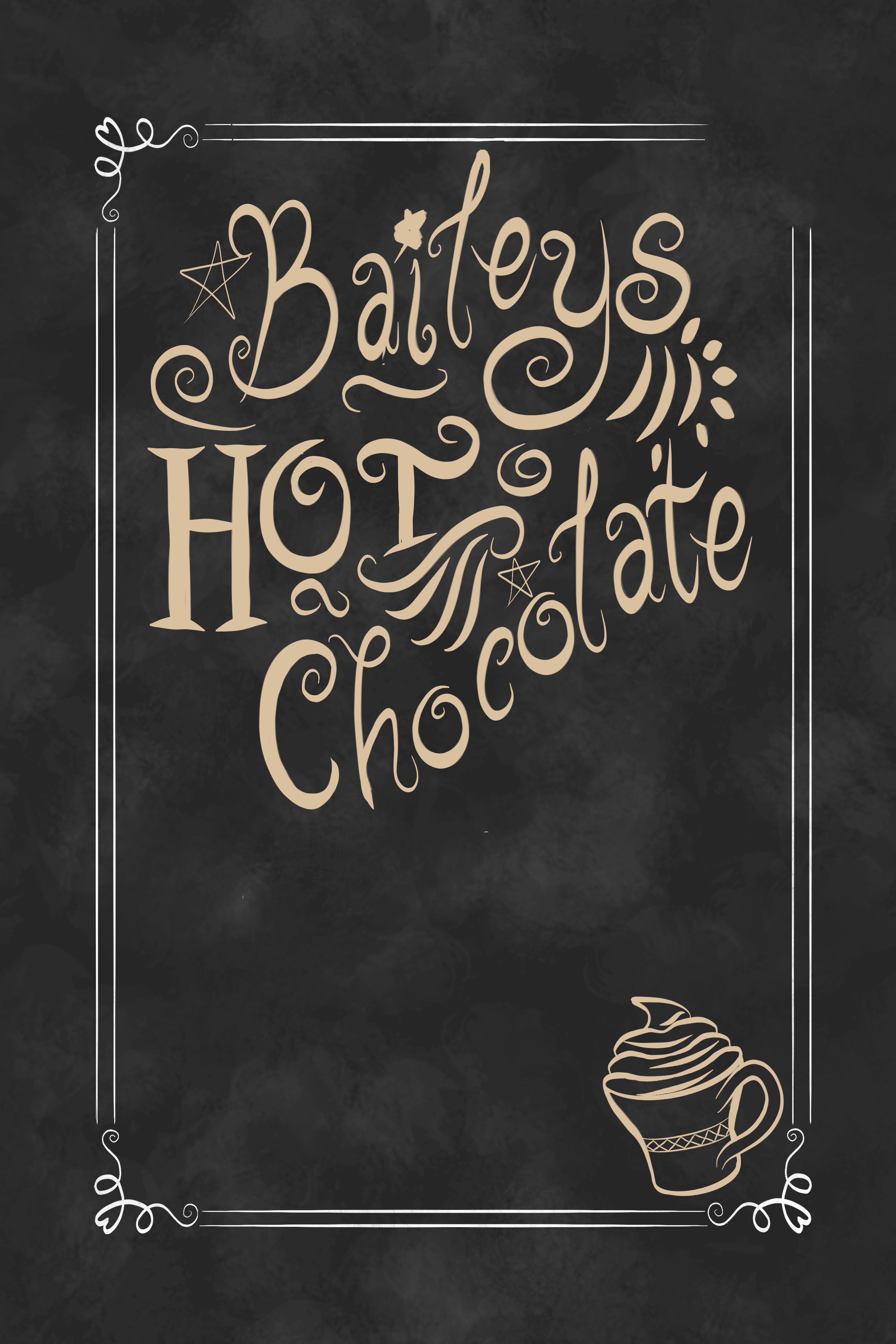 It wasn’t long before I abandoned the beige chalk in favour of white. Then I just needed to spend several evenings putting the recipe on. The biggest issue I had here was the layout. I put this image (below) on a design community Facebook group asking for help and someone helpfully suggested I research into a magical thing called composition. This means putting the words and pictures on to your design in a way that makes sense and looks great. 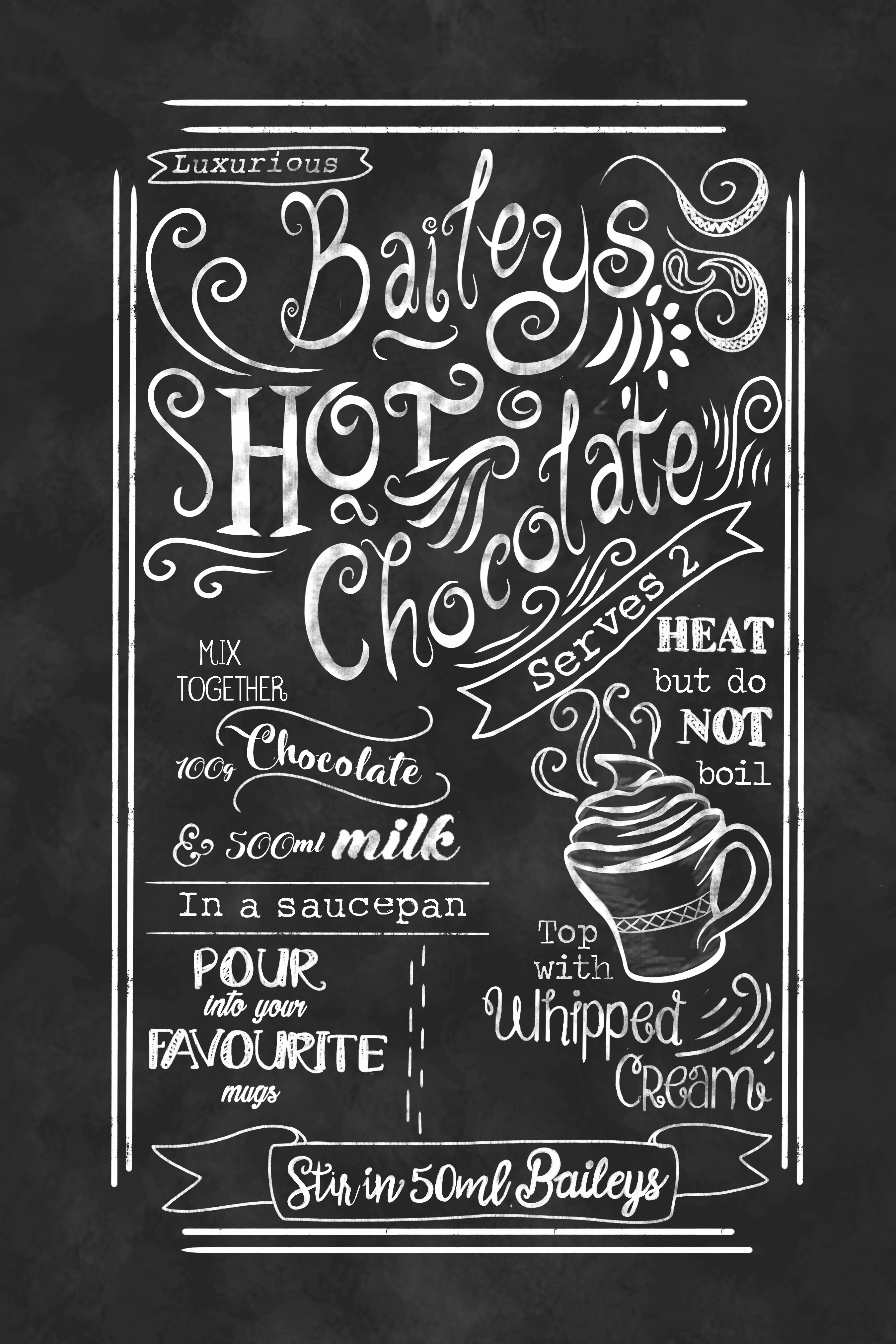 Instead of telling you everything I’ve learnt about composition I’m going to direct you to an awesome and instructive blog post by Sarah Dayan. One of her tips which I really went crazy with is to mix different font styles and sizes. I may have overdone it but I kinda like it. I also began to put some thought into which words I wanted to emphasise. As you can see, I wanted to emphasise HEAT and NOT in the instruction to ‘heat but do not boil’ and also ‘chocolate’, ‘milk’, ‘pour’, ‘favourite’ and ‘whipped cream’. However I hadn’t really thought about why I wanted to emphasise these words. It just sort of felt right.

I played around a bit but still struggling to find a way that worked for me, I asked my boyfriend for advice. He suggested putting just the top of the mug at the bottom of design and having the steam sort of turn into the word ‘Chocolate’. So I have that a go and also played around with the ‘mix together’ section to make it really fit in the space. 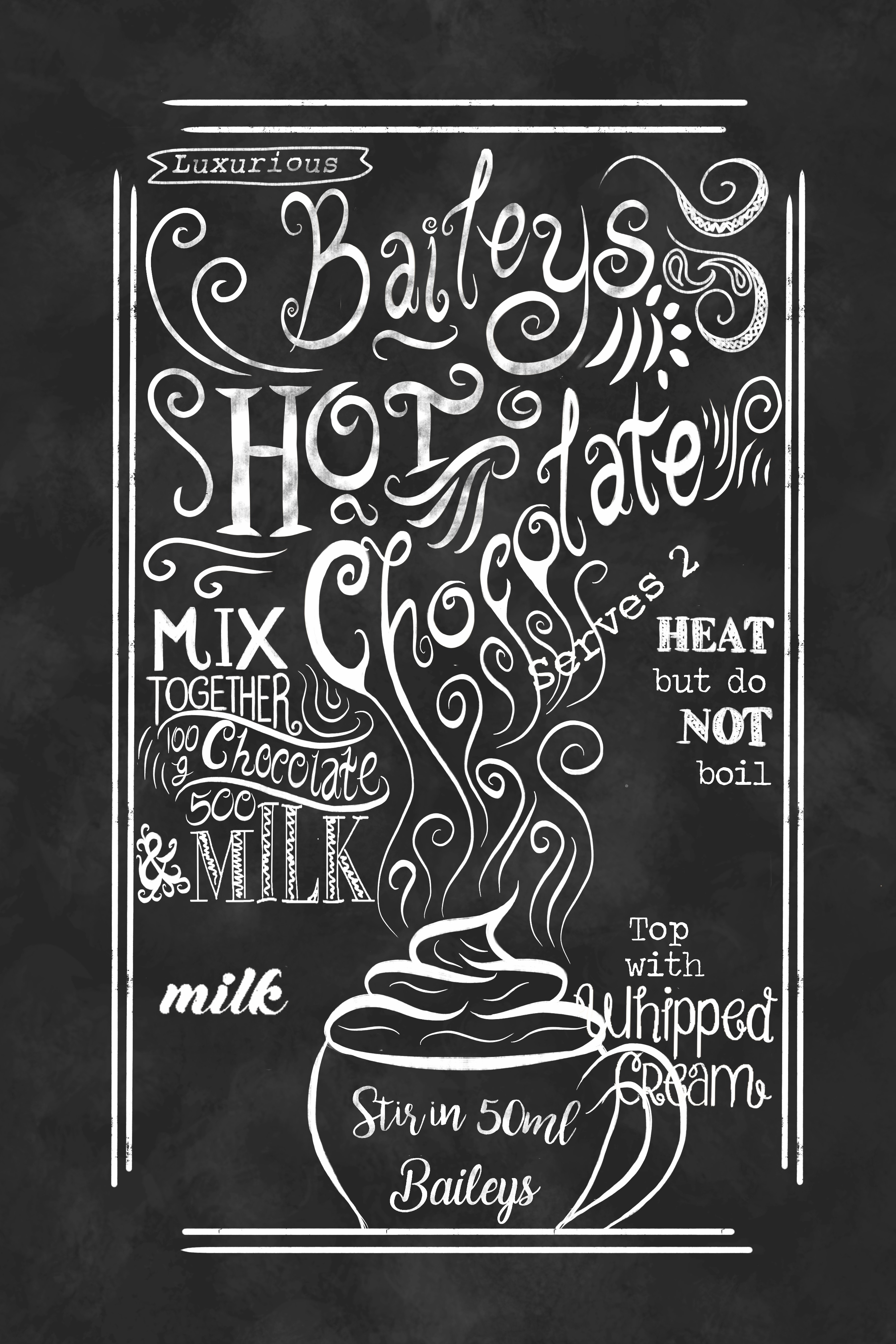 The text has been altered and (I think) massively improved. It looks really busy but I’m ok with that. The swirls were also changed a bit to have a criss cross thing going on. I also realised that the word ‘Baileys’ needed emphasising some more, so I made it chunkier. The brush I used (on Paintstorm by the way) is called ‘after gradient’ because it tapers nicely at the ends and I just removed the gradient and coloured it white. Then to make the white look chalky I roughed it up a bit with a textured eraser. Finally I added shading to the mug.

This is the version I submitted to the Spoonflower contest which I decided to do at the last minute after someone on Instagram suggested it… it’s definitely not perfect but that’s ok, I’m only a newbie after all and I’ll still have it printed on a tea towel for my kitchen. Alsooooo…. I’ve just noticed that Sarah Dayan has an article on how to mix fonts and it may be too late for this design, but I’m going to read it now and see what I can learn for the next one.

Drawing mugs and whipped cream was fun to do so here’s a little ‘picture guide’ on drawing a mug with whipped cream if you want to have a go 🙂 I did it using the gradient brush and selected a colourful gradient just for fun. And I added a spoon sticking out. 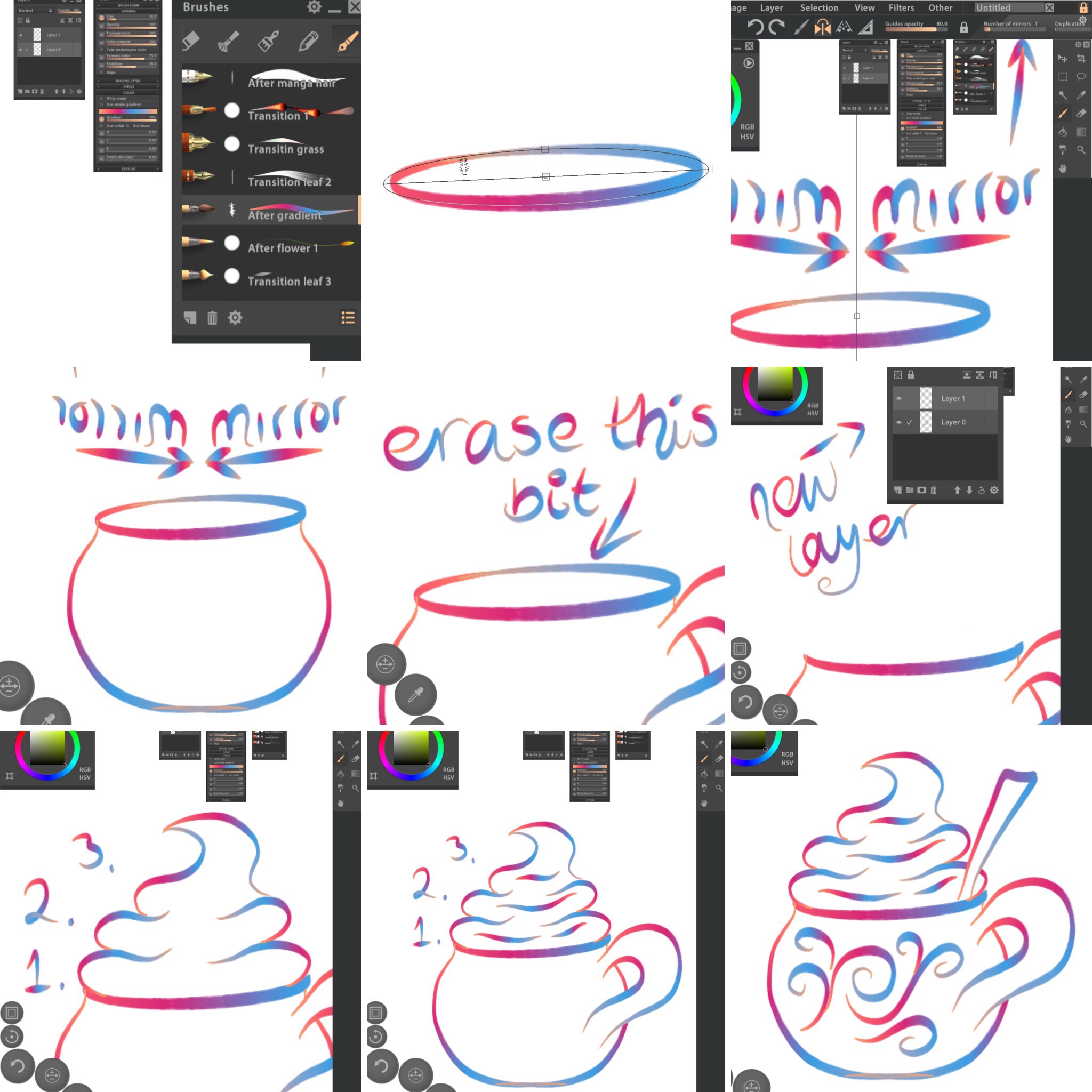 This is currently in the Spoonflower contest and voting is open until October 10th EDT, I’m not suggesting that my amateur design deserves your vote but I am suggesting that you go on to the voting pages and vote for a few of your favourites (I voted for 5!). Speaking from experience it’s really exciting to receive votes and there are some awesome ones on there.

Stay tuned people – it gets better every time!

This is currently my favourite mockup from @creatsyofficial as it enables me to show that my Seashells pattern is available in three different sizes - big, medium and small 👍🏻🐚 (I added the shells around the edge for this pic). Available to buy on my @spoonflower shop (link in bio)
Does anyone what type of Tillandsia this is? I was aiming for a tillandsia bulbosa but it’s so easy to get carried away 😆
My dream house is a pink and white thatched collage, in a tree. With tree trunk access (obviously). And bunting.
Two more houseplants because there is no such thing as too many house plants 🪴 did you know plants and flowers have a positive effect on our mental health AND physical health? True story.
I didn’t realise how many types of ficus plants there are - here is one, the Ficus Lyrata (which is also called the Fiddle Leaf Fig). This is for the #flourish #dailyartprompt
Why have one cactus when you can have five?
Keep going. Keep growing ✨ 🐛
Home on the Range is available in three sizes in my spoonflower shop :) (the small one is a little smaller than what this image shows). Someone has already bought the large one on curtains which I think will look amazing 🤩
Probably one of my favourite designs I have ever made! Both colours are available for sale on a bunch of fabrics in my Spoonflower shop and I will also sell as a non-exclusive license if you want to arrange your own printing 🤩 12inx12in 300dpi
Finished! ‘Seashells and Other Things’ (I should probably choose a better name 😁). This one has been entered into the Spoonflower contest which goes live on Thursday.
All other Spoonflower sellers will know what these are for! The Seashells pattern design contest deadline is fast approaching and this is as far I have got. Just about to start work (day job) so hopefully lunchtime will be enough to turn these seaside gems into a decent looking pattern 😆 Does anyone leave things they’ve known about for weeks right until the last minute?
All the best garden have REALLY BIG FLOWERS right? 🙌🏻🌷🌿